Skip to content
WHEN THE HUNTER BECOMES A PREY: WHO EATS WHO IN THE WORLD OF THE TUNA

When the hunter becomes prey: who eats who in the world of the tuna

Atlantic bluefin tuna are impressive marine predators. They are fast swimmers and can weigh as much as 400 kg. As adults, there are few predators they fear, but during the earlier stages of life, this giant is also prey.

What eats tuna when it is still at the larval stage or is just a tiny egg floating in the sea? During the first stages of their life, their size prevents them from fleeing or attacking, making them easy prey. “It’s ironic,” biologist Daniel Ottmann explains, “that we always have this idea that a tuna is the big fish that eats the little fishes, but it goes through larval stages in which it is very small and is prey for everything else.” 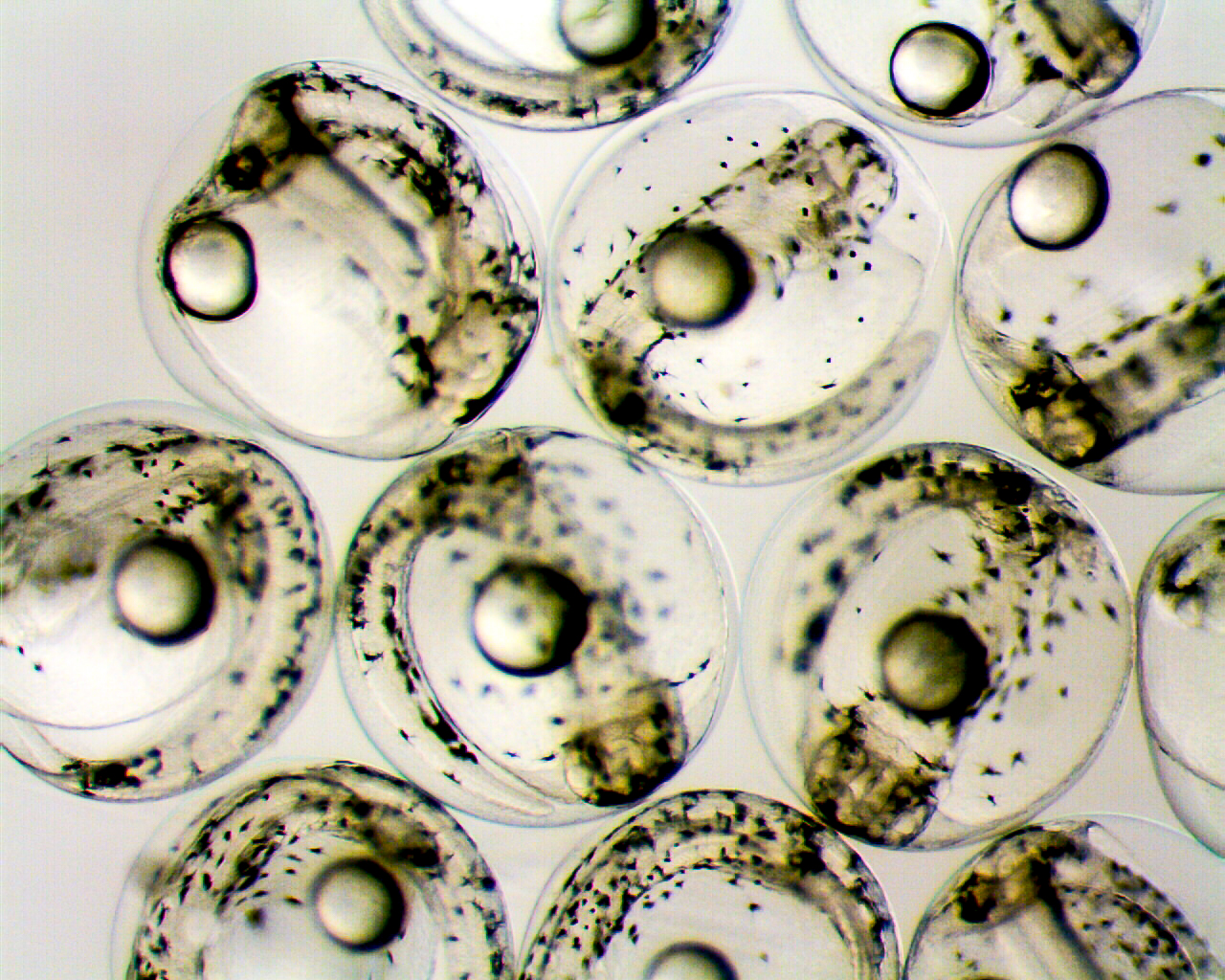 Ottmann has led a study that analyses the relationship between tuna eggs and larvae and one of their main predators: the ephyra or young of Pelagia noctiluca, one of the most abundant species of jellyfish.

In his PhD thesis, titled Who eats who in the world of the tuna Ottmann has, for the first time, quantified the mortality of tuna larvae and eggs due to jellyfish. 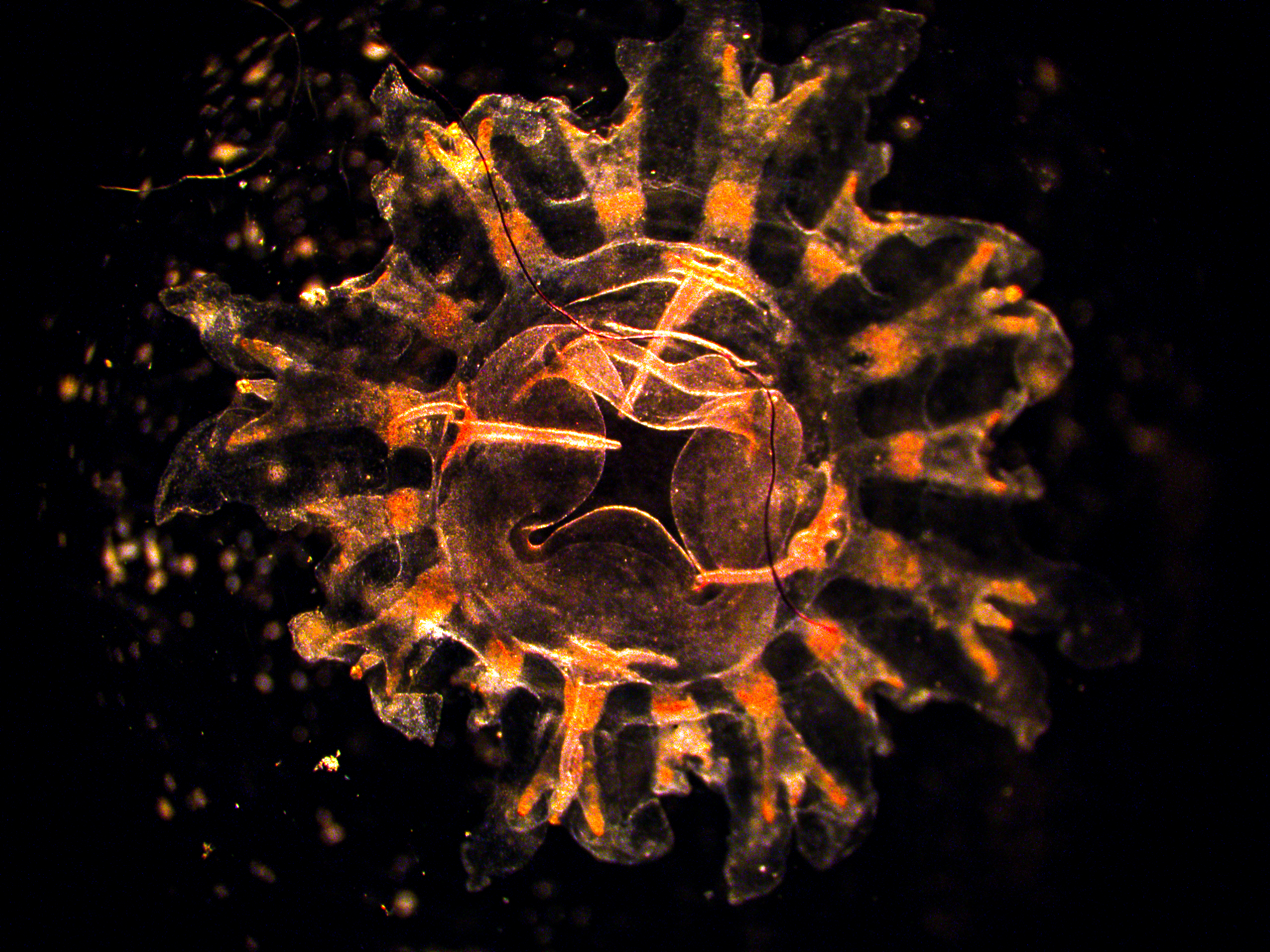 Ephyra or young of Pelagia noctiluca. Image by Laura Leyva.

Objective: save the little tuna

The basic objective of every living creature is to survive and to do everything possible to ensure that their descendants reach adulthood. This objective is also shared by Atlantic bluefin tuna. “Atlantic bluefin tuna live in the Atlantic but each year they migrate to their breeding areas, which are in the Gulf of Mexico and the Mediterranean. The question is: why? They are many miles away and getting there takes a lot of energy,” Ottmann points out.

In these two breeding areas, the water temperature favors the development and growth of larvae, but they could also go to other regions with similar temperatures, so there must be some other reason. And that reason is that, in these waters, there are few fish belonging to the sardine or anchovy family which prey on small organisms (plankton) in the water, including the eggs and larvae of other fish, such as tuna.

“But if there are so few predators, how is it that only two of every 30 million eggs survive? Something must be eating them or they must be dying of something. The plankton also include predators: jellyfish,” Ottmann explains.

An invertebrate: the main predator of tuna eggs and larvae

Tuna release millions of eggs into the sea during their spawning season (in June and July). The strategy of Atlantic bluefin tuna is to produce lots of young, in the hope that at least some will reach adulthood.

A tuna larva that is only 3.5 mm long has to struggle to survive armed with very few weapons, as it cannot see well, nor can it flee. Its parents have chosen a location with few predators so that their young have a better chance, but they can’t prevent every danger. 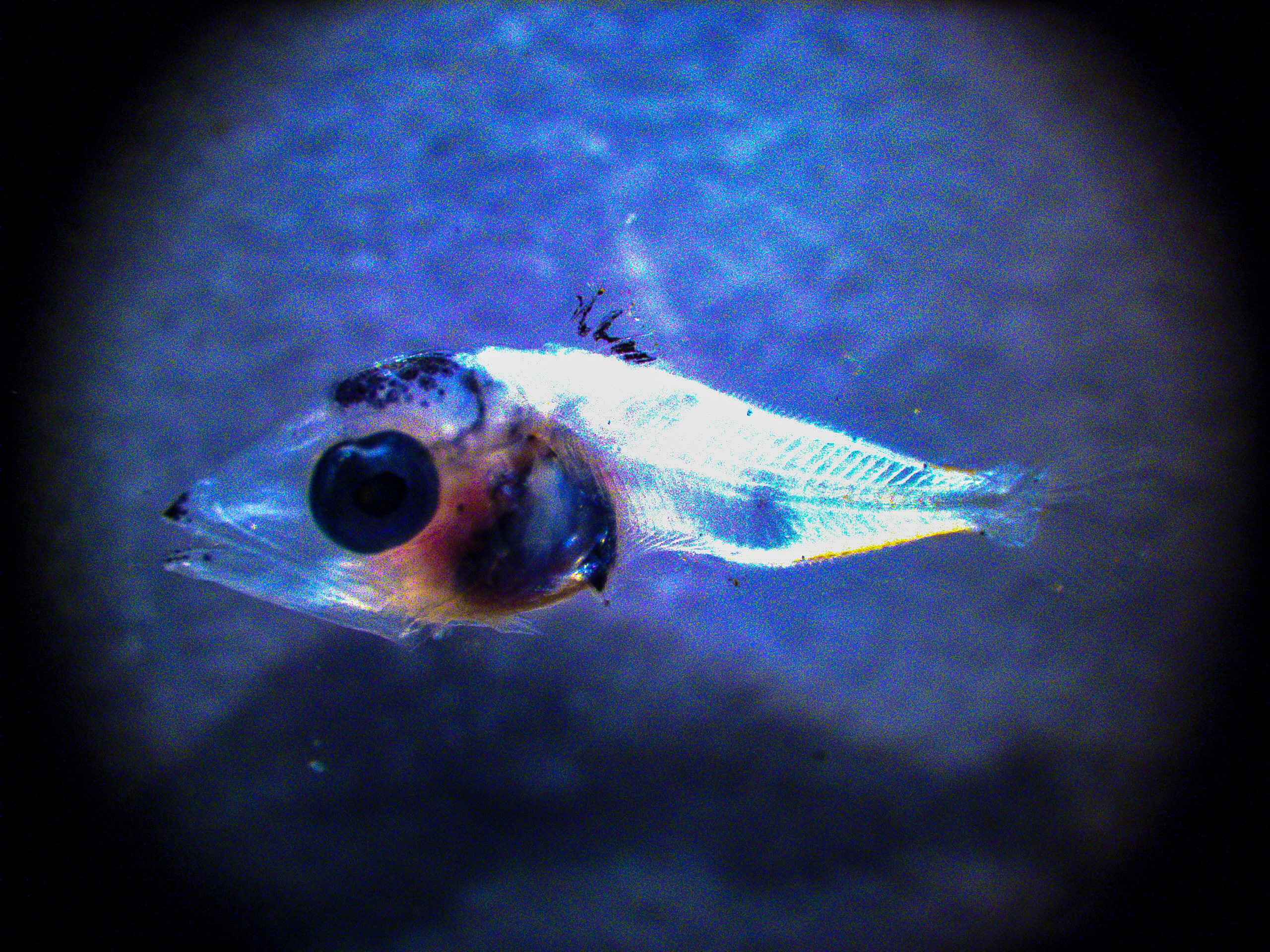 Surprisingly, it turns out that a small invertebrate is responsible for decimating the population of baby tuna. “Ephyrae are the young of jellyfish, they measure between 4 and 12 mm, and they predate on tuna eggs and larvae up to 5 mm long.” Ephyrae and tuna larvae coexist in the top 20 metres of the water column. Jellyfish larvae catch their prey by filtering the water, using their chemical sensors to indicate where food is to be found and going in search of it.

One of the questions Ottmann wanted to answer is whether tuna choose to spawn in areas where there are lower concentrations of jellyfish. The tuna that reproduce in the Mediterranean usually choose a front where waters from the Atlantic merge with those of the Mediterranean, while jellyfish are more abundant in resident waters.

The front could be a signal that tells the tuna there won’t be so many jellyfish in these waters and, in fact, according to Ottmann, “where there are a lot of tuna, there are few jellyfish,” and vice versa. “Tuna reproduce in specific areas where there are fewer jellyfish. It may be that selective pressures have meant that tuna which reproduce in these areas have more reproductive success, driving them to choose these locations,” he suggests.

The other factor is that jellyfish reproduce earlier than tuna. Their spawning season begins in April and peaks in May, before the tuna start to spawn in the middle of June. This indicates that jellyfish are not adapted to eat tuna because, if they were, their spawning seasons would coincide. Ephyrae are opportunistic predators and feed on whatever they find, a varied menu that includes the eggs and larvae of tuna.

Another question that comes up when we analyze the relationship between jellyfish and tuna is whether the number of jellyfish has remained constant or if they have become more abundant in recent years. “In the Mediterranean, jellyfish have cycles lasting between 10 and 15 years. In France, records have been kept for almost 200 years, and in recent decades there have been more population blooms than before,” Ottmann explains.

Who eats who in the world of the tuna: a pioneering study

It isn’t easy to quantify the mortality of a marine species, and Ottmann’s study is probably one of the first to calculate the mortality of tuna eggs and larvae as a result of predation by jellyfish. 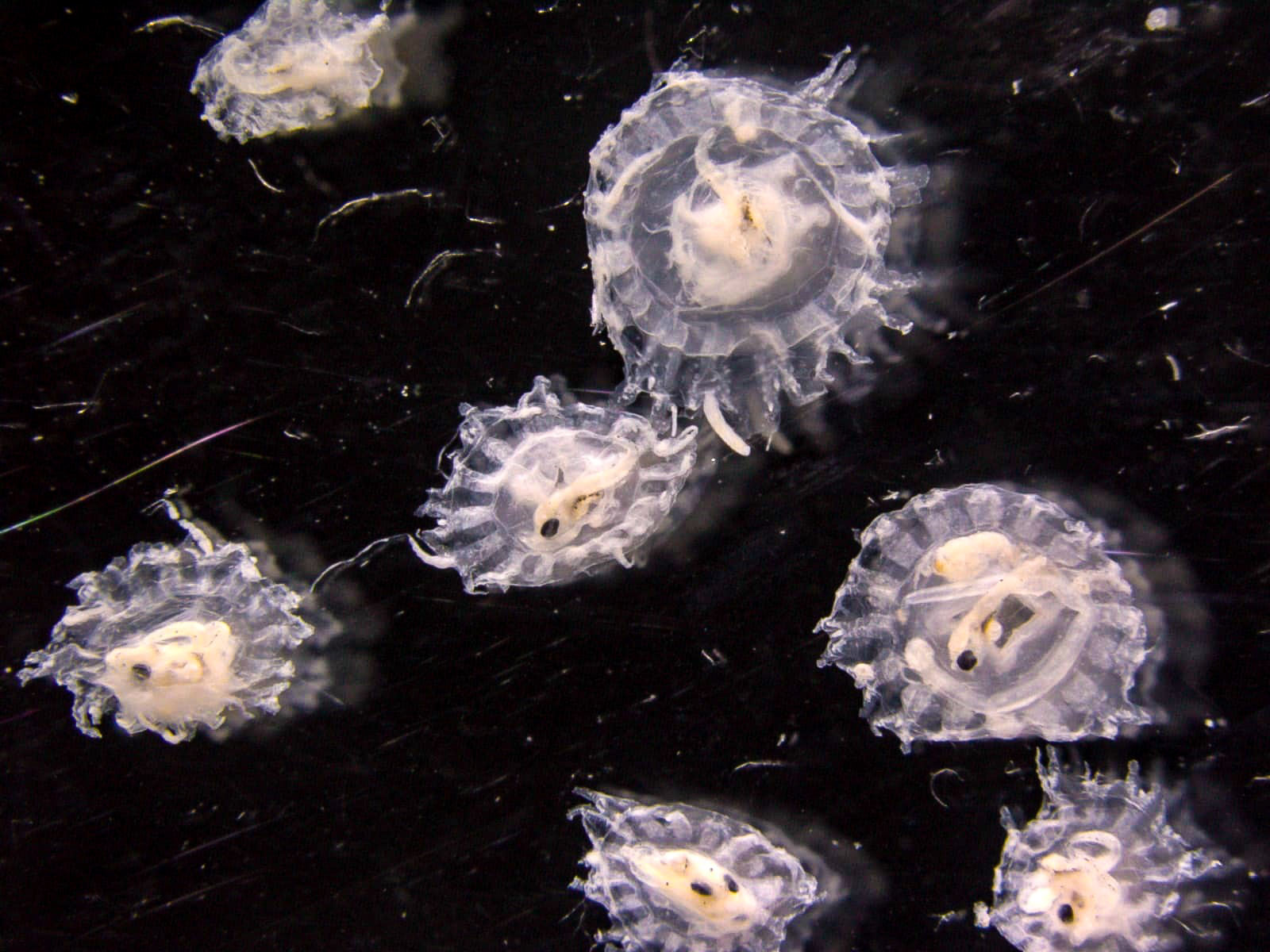 There are very few research projects that have been able to access so much information: “We were lucky enough to have really huge samples. Over a period of six years, we took annual samples every ten miles of predators and prey, who are at the same depth. And other researchers, such as Ana Gordoa, have conducted experiments to determine how much prey a predator can eat.”

“In my study,” he explains, “we have combined experimental data with several years’ worth of field data on abundance, and we have mathematically calculated the amount of tuna that jellyfish can eat.” 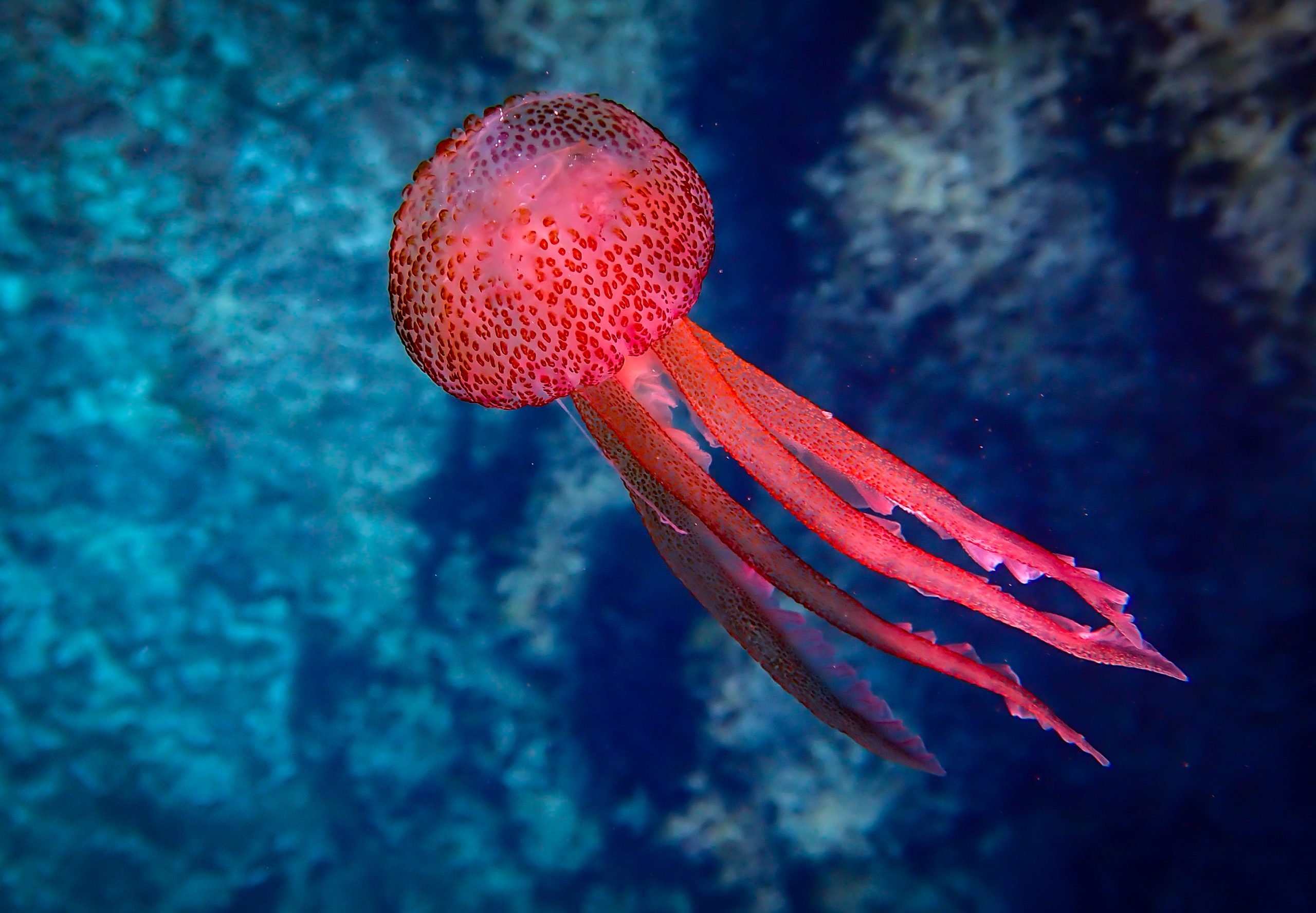 This data includes the density of ephyrae and the volume of water each ephyra can filter in an hour (4 litres). “Based on that,” Ottmann tells us, “I calculated a tuna egg’s probability of surviving a given number of hours.”

As a general rule, tuna larvae have a low probability of surviving, particularly if they are unlucky enough to coincide with abundant ephyrae. As Ottmann says, “My study shows that in some regions it is almost impossible for tuna larvae to survive.”

Tuna mortality caused by jellyfish depends both on the abundance of the latter and on the degree to which the two species overlap. And it seems clear that tuna ‘avoid’ coinciding with the species that is responsible for the greatest losses of its eggs and larvae. 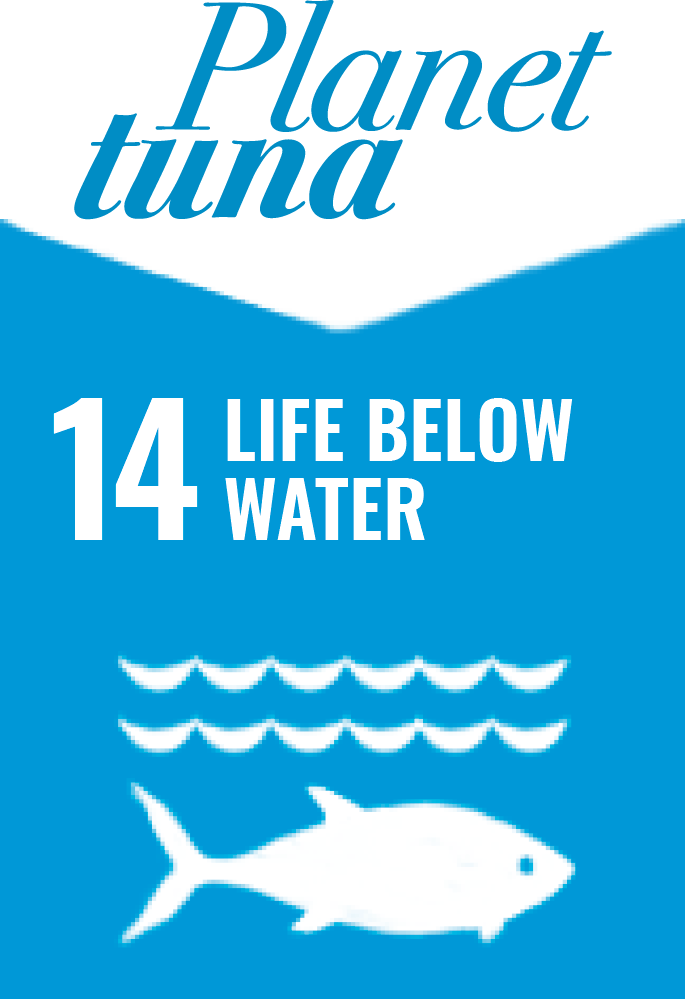 This content is part of the ocean education program, Centinelas, and deals on Sustainable Development Goal  14, Life Under Water.

With the collaboration of: