Parasite. The word sounds kind of terrible, doesn’t it? We think of it as something negative, yet, as we’ll see in this article, reality is more complex, and the presence of parasites can be a sign of a healthy ecosystem. Parasites are one more piece in the puzzle, just as important as other life forms and necessary for keeping everything in balance.

Parasites as Biomarkers: The Mysteries that Parasites Explain

Any one of us can answer simple questions such as where we had lunch today or what our last travel destination was. Marine animals can’t answer them directly, so scientists have to figure out other ways of getting that information. Strange though it may sound, parasites are precious allies for researchers. A parasite is an organism that lives in contact with other animals and with the ecosystem. Researchers can learn about the migration patterns of fish and mammals, where they feed, and where their breeding areas are located by examining the parasites they find inside them. This is possible because each geographical region –each system– has its own parasites. The host acquires them as it moves around. If we know what parasites are present in a given area, we can find out where the host fish has been. That’s how those organisms become natural markers like the ones biologists use to tag animals.

The use of parasites as biomarkers is important in terms of its application to population management. Species that are endangered or have a high commercial value may require regulated fishing. Monitoring through parasites has some advantages. Parasitologist Salvatore Mele tells us that one of the advantages of this monitoring system is that it’s natural. All the researcher has to do is examine specimens that died from natural causes or were fished for human consumption. Some of the disadvantages he mentions are that many parasites have never been studied or classified, so the first thing one has to do is study the tag before validating it. Another drawback is that some parasites have short life cycles, so they’re not useful as markers.

The information gathered from studying the parasites in an animal’s body is a valuable addition to biological research studies. Salvatore Mele gives us the example of research on trophic biology –on the diet of the animals that are being studied. “Identifying the catch in an animal’s stomach is very hard. You’ve got to be lucky enough to find it shortly after it was ingested,” he points out, and adds that the presence of certain parasites helps you determine what prey the predators catch because many of the parasites are only found in one or a few of the prey species. For example, we know that Scomber colias—chub mackerel—eat jellyfish. Even though jellyfish break down quickly because they’re so rich in water, we know that they’re part of the chub mackerel’s diet because the fish get infected with parasites that are found in the tissues of the jellyfish. 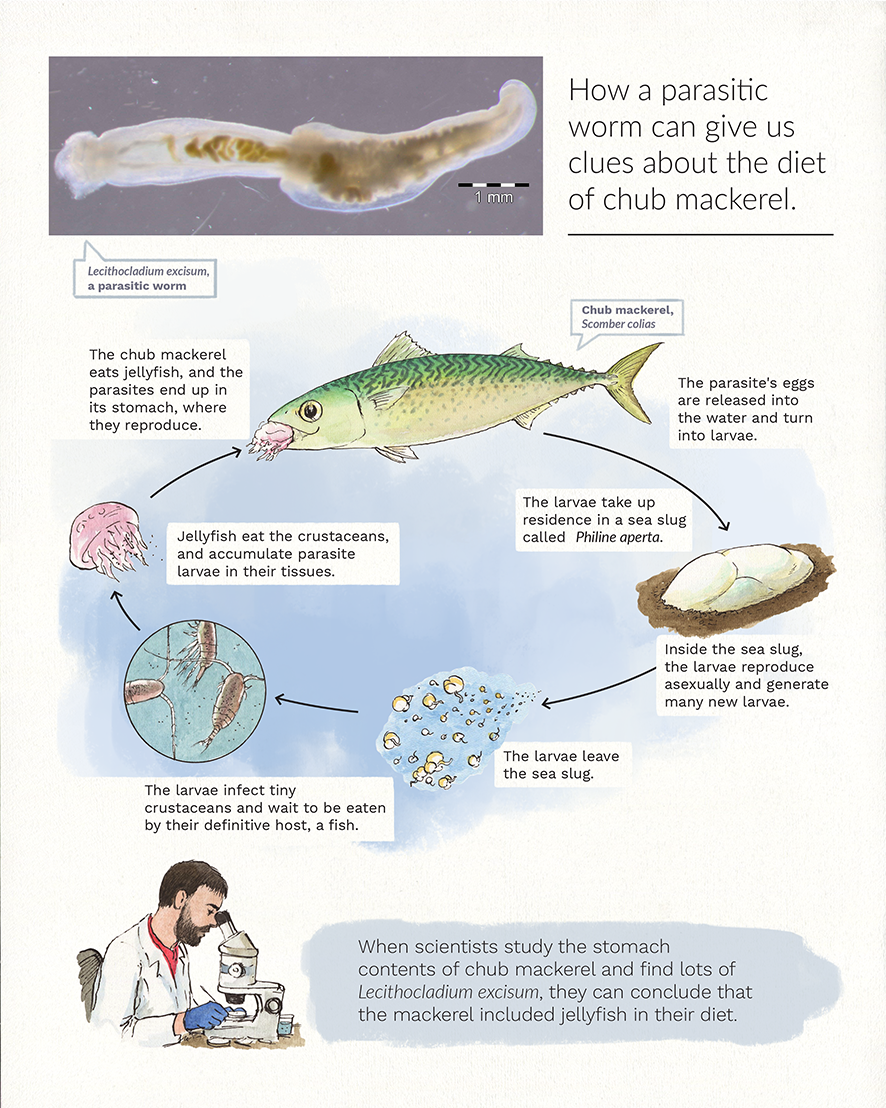 Where Shall We Eat Today?

Understanding the biological cycles of parasites and learning about their hosts helps us find out where those fish go to feed. For example, in the Mediterranean the larvae of Anisakis physeteris mostly infect deep-sea fish, whereas Anisakis pegreffii larvae live primarily in surface waters. “Seeing if the two types of Anisakis are present, and in what percentage, we have an idea of where that fish has been feeding, whether it goes deeper than 200 meters or stays closer to the surface.” All that information adds up and contributes to outlining trophic behavior. Studying parasites is also useful for learning about migratory and social behavior. For example, using parasites as biomarkers has enabled ethologists to estimate how groups of fish mix. “If they travel together, they eat together; if they do so in a given region, with a very specific parasite that enters organisms through their diet, those fish are marked, and even if they change groups or associations, we know where they’ve been.” The question is important for establishing whether there has been genetic exchange between two families or groups of fish that were spawned in different areas and whether they can identify each other in those areas and create new groupings.

As an example, Dr. Mele tells us that he looked for parasites in Bluefin tuna fished near the island of Sardinia and found four different types that only reproduce in the Atlantic. The following illustrations show these parasites and what each one tells us about where the tunas had been before entering the Mediterranean. 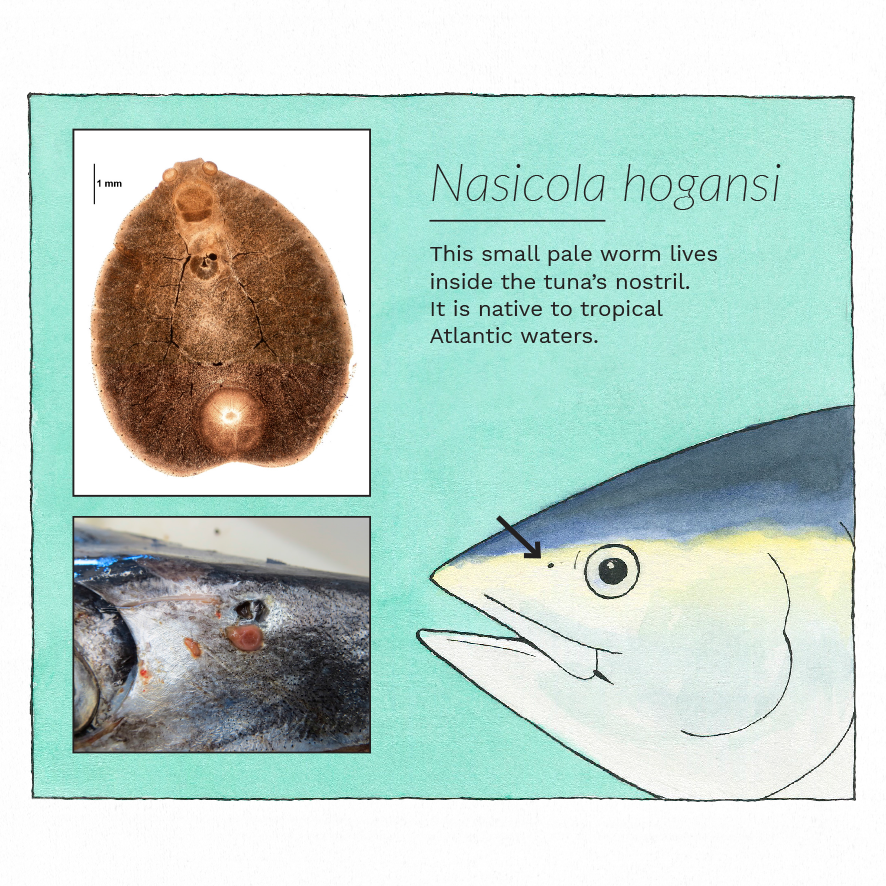 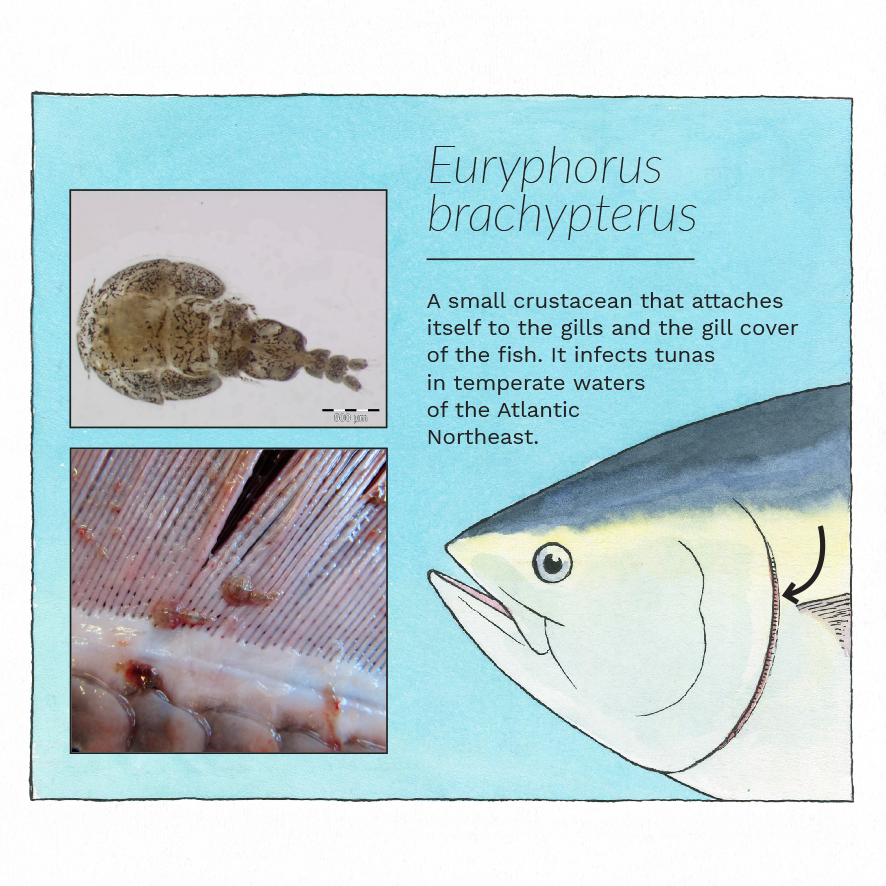 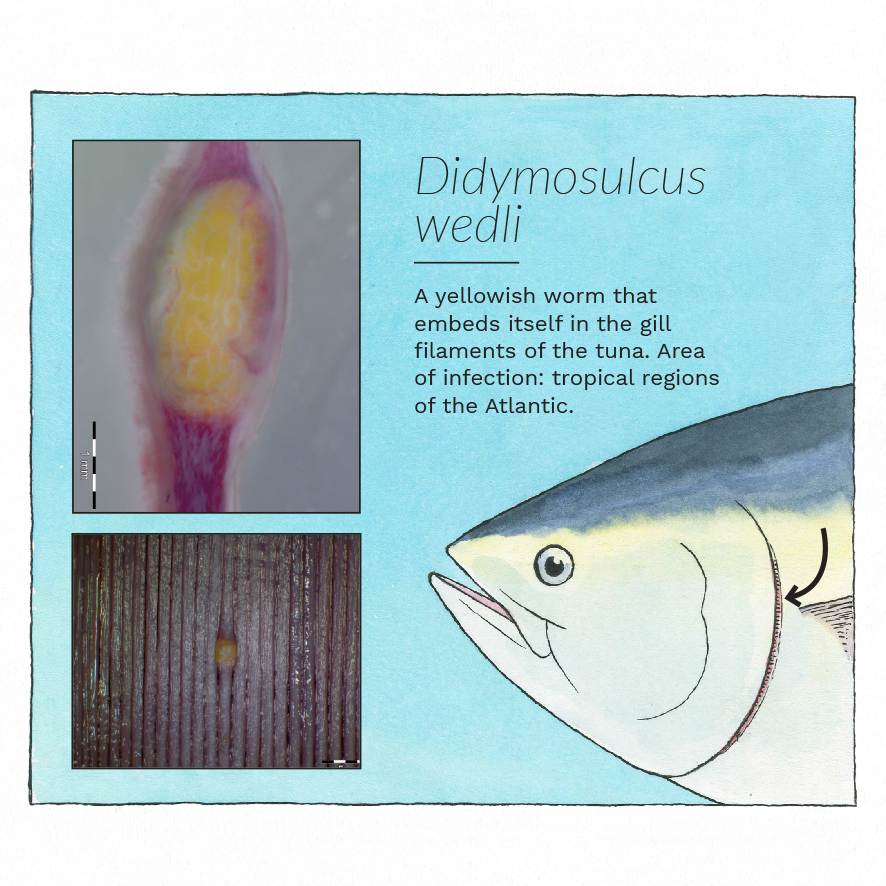 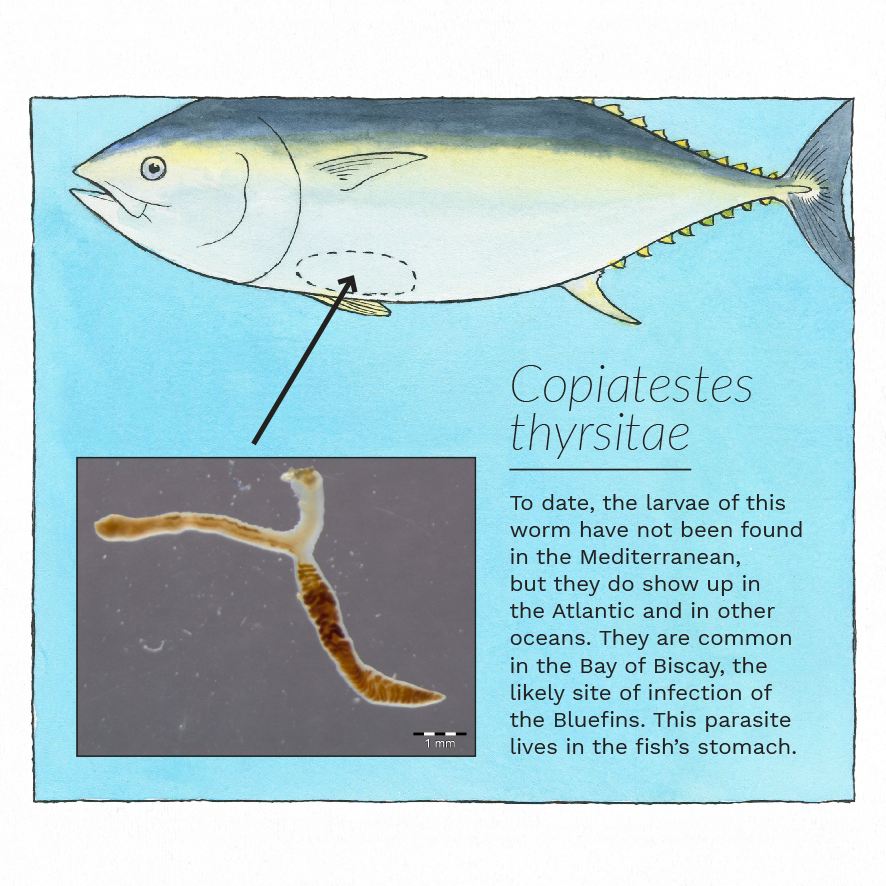 The use of parasites as markers can also be applied to protecting ecosystems. A parasite needs a host, but it also needs the area where the host lives to be in optimal condition. Some pollutants can kill off the parasites in a given area; therefore, an easy way of detecting physical changes is to measure pollutants, and, in terms of ecological changes, to check whether the sentinel parasite is abundant or not. According to Salvatore Mele, in Mexico, a direct negative correlation has been observed between a higher concentration of a pesticide molecule—DDT—in some rivers in the Yucatán peninsula and the presence of certain parasites which normally infect the fish living in the bays at the mouths of those rivers. Likewise, some scientists are monitoring the recovery of the ecosystem of the Iberian coastline after the disastrous sinking of the Prestige tanker in the Bay of Biscay, which spilled huge amounts of oil in the area. Instead of taking daily samples to measure water quality, they can just observe the number of parasites in the area. If their numbers drop, it’s an indication that there’s a problem, whereas if it’s within a normal range that means the ecosystem is doing well.

So, the next time you hear the word “parasite”, remember: they’re not really our enemies. They’re a necessary piece of the complex puzzle of ocean ecosystems. And for scientists, they’re allies with interesting stories to tell.