Tuna species that breed in the Mediterranean

Which they are and how they get here

The Western Mediterranean: A Good Place to Start the Adventure of Life

Warm waters with enough good for the largest possible number of larvae to survive: those are the key conditions that lead several tuna species to choose the Western Mediterranean as their spawning ground. Besides, there are other factors that may be important in the choice of this area over others. It may be its proximity to islands, or the currents that form when the dense waters of the Mediterranean come in contact with the less salty Atlantic waters. 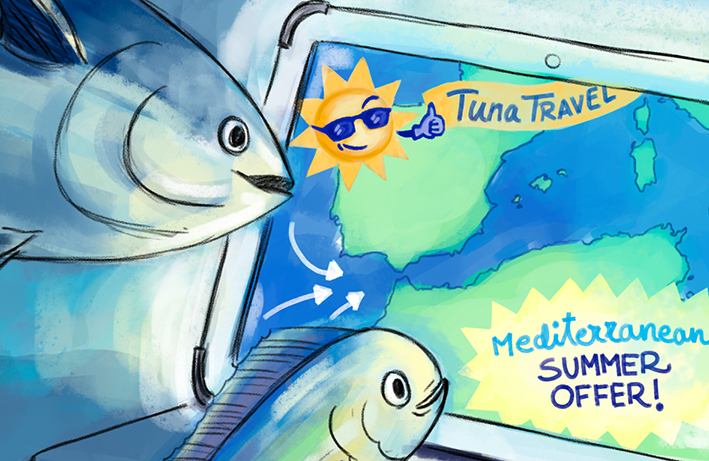 There are several species of tuna that live in the Mediterranean and spawn in the Western Mediterranean. Although they are our neighbors, certain aspects of their lives are still a mystery to us. This is true of the albacore or longfin tuna (Thunnus alalunga), a mid-size tuna that can grow up to a meter and half long as an adult. Thunnus alalunga also lives in the North Atlantic and the Cantabrian Sea, where it’s marketed as Bonito del Norte. In addition, there are populations that inhabit temperate and tropical waters all around the world.

The fact is that, apparently, most albacore in the Mediterranean never leave the area, only traveling short distances between feeding and spawning grounds. The breeding season lasts about three months, from June or July through late August, although we don’t yet know the limits of all the areas where it takes place. It seems that the alalunga migrates from east to west within the Mediterranean, but so far that’s only an assumption.

Although the bullet tuna (Auxis rochei) is distributed throughout temperate and tropical regions in all the world’s oceans, it has resident populations in the Mediterranean which also breed during the summer months. It’s a small tuna species that can reach 50 cm in length and is widespread in coastal areas throughout the year.

The Presence of Tropical Species in the Mediterranean

Two tropical tuna species are currently spreading in the Mediterranean: the skipjack tuna (Katsuwonus pelamis) and the little tunny (Euthynnus alletteratus). They’re both small and very abundant in their native waters. Many of us don’t realize that the skipjack has been a household name for a long time: it’s the world’s most widely caught tuna species, living in all the planet’s oceans –the one in most of the cans of tuna we eat. Both the skipjack and the little tunny are on the rise in the Western Mediterranean, where they breed from May through August. So far, their migration routes remain unknown.

Until recently, the assumption was that the Atlantic bluefin tuna only bred in the Mediterranean and the Gulf of Mexico. However, new studies have shown that there is a third area off the coast of the Northeastern United States –and there may be even more areas yet to be discovered. It’s incredible how little we know about this species considering it’s one of the most thoroughly researched.  Raising eggs, larvae, and juveniles in captivity at the Spanish Institute of Oceanography gives us a chance to collect relevant information about the biology of the Atlantic bluefin tuna, including the factors that affect their survival and development during the first months of their lives.

Although they aren’t tunas, these three pelagic fish species also breed in the Western Mediterranean in the summer. The swordfish (Xiphias gladius) is the largest of the three. It’s easy to recognize because of its sword-like bill. The common dolphinfish (Coryphaena hippurus), also known as mahi-mahi or dorado, is present in the Mediterranean as well. Although this species isn’t sold at the markets on mainland Spain, the juveniles are caught in the late summer and autumn in the Mediterranean islands (Malta, Sicily, and the Balearics) and are highly valued in the local cuisine. These two species reproduce in pairs –unlike tunas and the Atlantic bonito, all of which spawn in groups– which means that their eggs and larvae are distributed in separate areas and in smaller numbers. By the time swordfish larvae are only a few days old, you can already see their tiny sword. 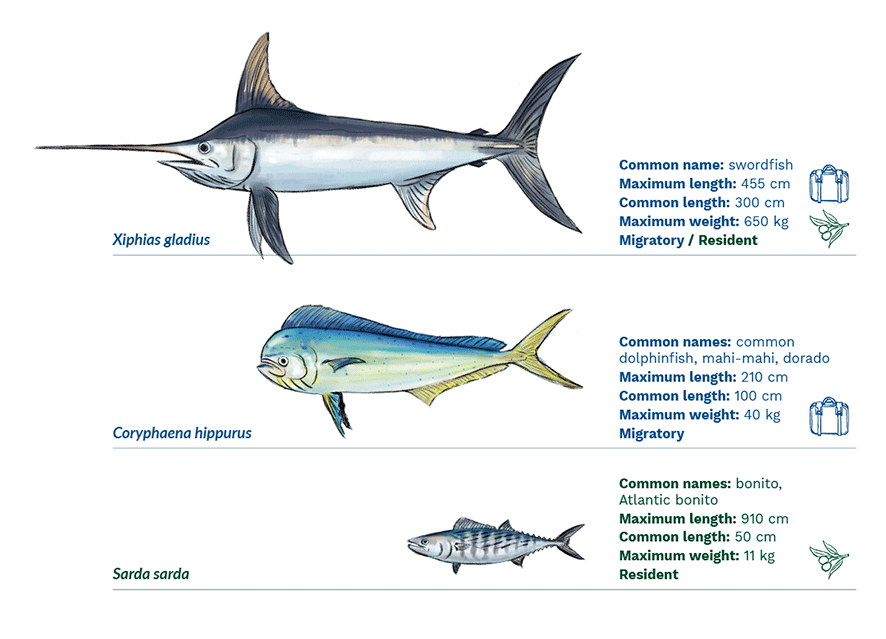 The Atlantic bonito (Sarda sarda) is a relatively small-sized species that spawns in larger numbers in the waters along the coast of the Spanish mainland than in those surrounding the Balearic Islands. By the way, don’t get this species confused with the albacore or longfin tuna (Thunnus alalunga), marketed as Bonito del Norte. When they’re only seven days old, the Atlantic bonito larvae are voracious, capable of gobbling down a larva of any tuna species in the blink of an eye. The Spanish Institute of Oceanography has managed to breed this species in captivity throughout its full cycle, which means that specimens bred in captivity were able to breed in captivity as well. Farmed specimens are not marketed, they are only bred for scientific purposes.