Skip to content
THE SHERLOCK HOLMES OF THE OCEANS
In the ocean, a scientist’s job is a lot like detective work.

The Sherlock Holmes of the oceans

In the ocean, a scientist’s job is a lot like detective work. 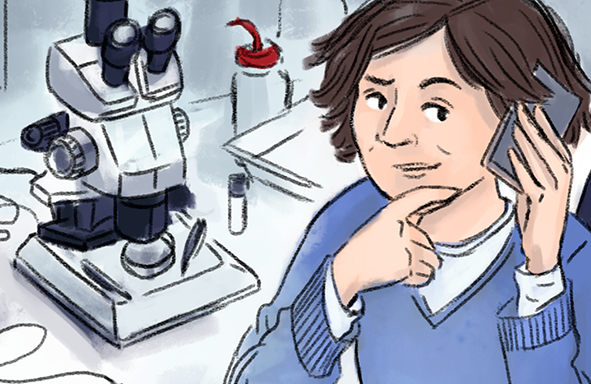 Solving the Mysteries of Life in the Oceans

Writing a biography of someone you know is fairly easy. We all know details about the people we find interesting: their birthday, where they were born, who their parents are, whether they do or don’t have children themselves, how old they are, or what places they’ve visited. We may also have a lot of information about a specific animal or terrestrial plant. You probably even have a photograph of the first day your pet came to your home or you may remember when you planted a certain plant or tree. All that information is a mystery when it comes to the organisms living in the ocean. In the ocean, you have to do some pretty good detective work to get even the most basic information about each one of the creatures you come across. And that’s what we scientists are: the Sherlock Holmes of the oceans.

One morning in late spring, on an unseasonably cold day, I was sitting in the office and the phone rang. The friend who was calling told me that, like every other year, large schools of Atlantic bluefin tuna were swimming near the Balearic Islands. And like every other year, my colleague was working on an oceanographic campaign to sample bluefin tuna larvae for his research. But this time, although the reason for the adult tunas to have gathered there was to spawn, none of them seemed to be doing so. Would I be able to figure out why the Atlantic bluefin tuna’s spawning period was later than usual that year?

We called a meeting right away. I couldn’t answer the question alone. I needed my colleagues’ help. “It must have something to do with the water temperature,” said oceanography experts Rosa and Diego. “The surface waters where tuna spawn warm up, especially due to sunlight, and they don’t warm up at the same rate or at the same time every year. We can look at the sea temperature readings in the satellite data for the past few days and compare them with the temperature readings for previous years.” That was how we found out that this year was colder than others.

“Now that I think of it, if could have to do with cold water,” said Antonio and Curro, experts at researching the behavior of spawning adults. “For several years, with the help of fishermen, we’ve been checking the weight and developmental stage of adult tuna’s gonads to determine the temperature at which the females and males are ready to release eggs or sperm.” When we generated a graph with the data for the weight of the female gonads and the water temperature readings, we realized the eggs were only released into the water when the temperature was over 20ºC. “Great! That would explain why they haven’t started spawning yet. The water still has to get warmer and make it above 20ºC!”

Next, Aurelio –an expert at breeding fish in captivity– and Edurne –a student in the last year of her PhD– told us about some of the reasons why Atlantic bluefin tuna don’t spawn when the water is cold. “We’ve got it. They won’t spawn until the water temperature rises above 20ºC because otherwise their young wouldn’t survive.” “And how do you know that?”, we all chimed in. “Last year we did some testing with tanks at different temperatures. We put fertilized eggs and larvae in separate tanks. We saw that Atlantic bluefin tuna eggs and larvae survived when the temperature was above 20ºC, whereas at lower temperatures, they died.”

Edurne and Aurelio show us the results of their experiments, with the tanks behind them

“Thanks! I think I can answer our colleague’s phone call now. I’ll tell him that the tuna are waiting for the water to warm up before they start spawning. Case closed!”