OUR TUNA RELATIVES
The evolution of vertebrates, including ourselves and tunas

OUR TUNA RELATIVES
The evolution of vertebrates, including ourselves and tunas 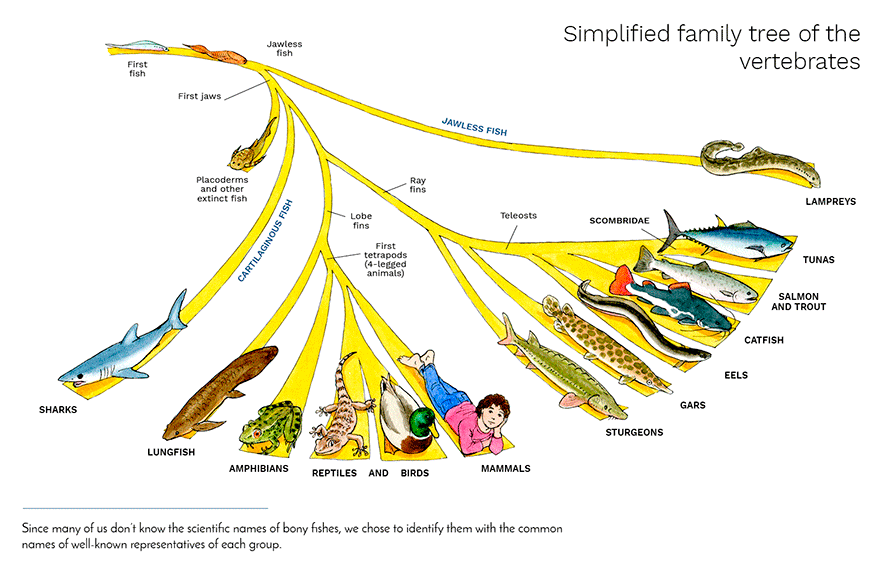 The earliest fish appeared in the Cambrian period, a little over 500 million years ago. They were a very simple, pared-down version of a fish. They didn’t have paired fins and their little mouths were jawless, but they did have a few features that are typical of fish: a head with two eyes and two nostrils, a notochord (an early version of the spinal column), muscles in a zig-zag pattern, and support structures known as gill arches.

Although they look nothing like us, proto-fish like the Haikouichthys you see in the illustration are the ancestors of all vertebrates, including frogs, snakes, lizards, birds, fish, and mammals.

Haikouichthys, one of the earliest fish

The Evolution of Fish

Three major groups of fish evolved from these earliest fish and have survived until today. The oldest, and least common, are the cyclostomes, a small group that only includes lampreys and hagfishes. Like the first fish, these strange long-bodied creatures have no jaws.

A lamprey, a jawless fish

Later on, fish with jaws started to appear on the scene, and turned out to be a great evolutionary hit, leading to tons of different species. And they finally looked like what we know as fish!

Two main types of fish with jaws inhabit our oceans today: cartilaginous fish –sharks and rays– and bony fish, which include all other kinds of fish.

Everything from carps to seahorses, from groupers to tunas and many more –close to 96% of all living fish are bony.

A shark (a cartilaginous fish) and a salmon (a bony fish) 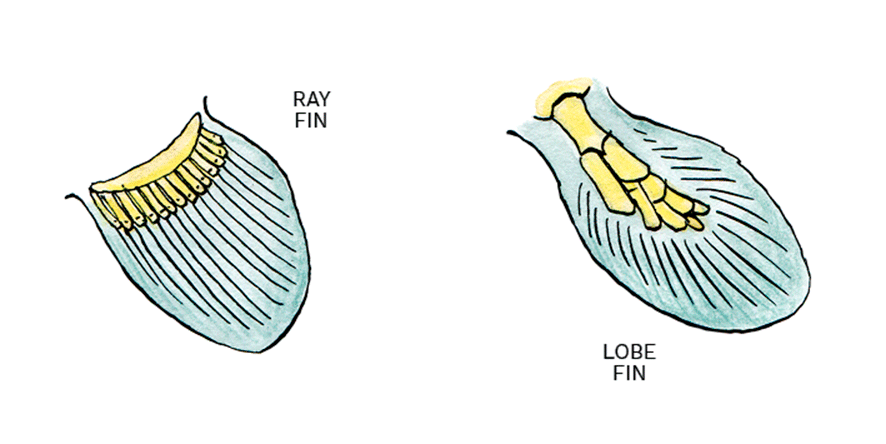 Lobe-finned fish (scientific name: Sarcopterygii) have a series of bones at the base of their fins that bear a curious resemblance to the bones in our arms and legs. And the fact is that these bones evolved to become the bones of the limbs of the first amphibians 370 million years ago. And those first amphibians evolved into all other tetrapods, or four-legged animals –ourselves included.

Ray-finned fish, on the other hand (scientific name: Actinopterygii), have a series of parallel rays in their fins. These include the vast majority of the fish that exist today, including tunas. Tunas belong to a subgroup of ray-finned fish called teleosts, which developed a series of improvements to their jaws and fins. Within the teleosts, we find a family known as the Scombridae, which includes tunas and their closest relatives, like bonito and mackerel. Scombridae are open-water predators whose bodies are perfectly adapted to swimming faster than their prey.

It definitely must have been some fish that lived before these two groups went their separate ways. We don’t know exactly who that common ancestor was, but based on the fossil record, scientists have figured that it probably lived about 400 million years ago, in the early Devonian. That’s a long, long time ago, but even so, it means that we’re related –even if distantly—to tunas. Tunas, in turn, are more closely related to me and you than they are to sharks, because cartilaginous fish split away from bony fish even earlier on. The diagram at the beginning of this article may help you visualize this branching of the fish family tree –which is ours as well.