What’s the difference between yellowfin tuna and bonito? What’s the scientific name of the highly valued bluefin tuna? And, above all, how can we know what kind of tuna we’re buying? When it comes to buying and eating tuna, the more information we have about the product, the more responsible and better our purchase will be.

Can you tell the difference between Atlantic bluefin and albacore tuna?

The common name we use for each species isn’t a big help, either.

The same species is often given different names in different places, or the same name is used for several species.

That makes things particularly confusing for labeling, despite national and European regulations.

Labeling: A Day at the Market

Speaking of labels, we went over to the market and found three different signs selling tuna. The first said TUNA. The second one said SUPER “EXTRA” TUNA. The third said DEFROSTED “EXTRA” TUNA. What were they actually selling in each case? We had a look at the information on the labels. 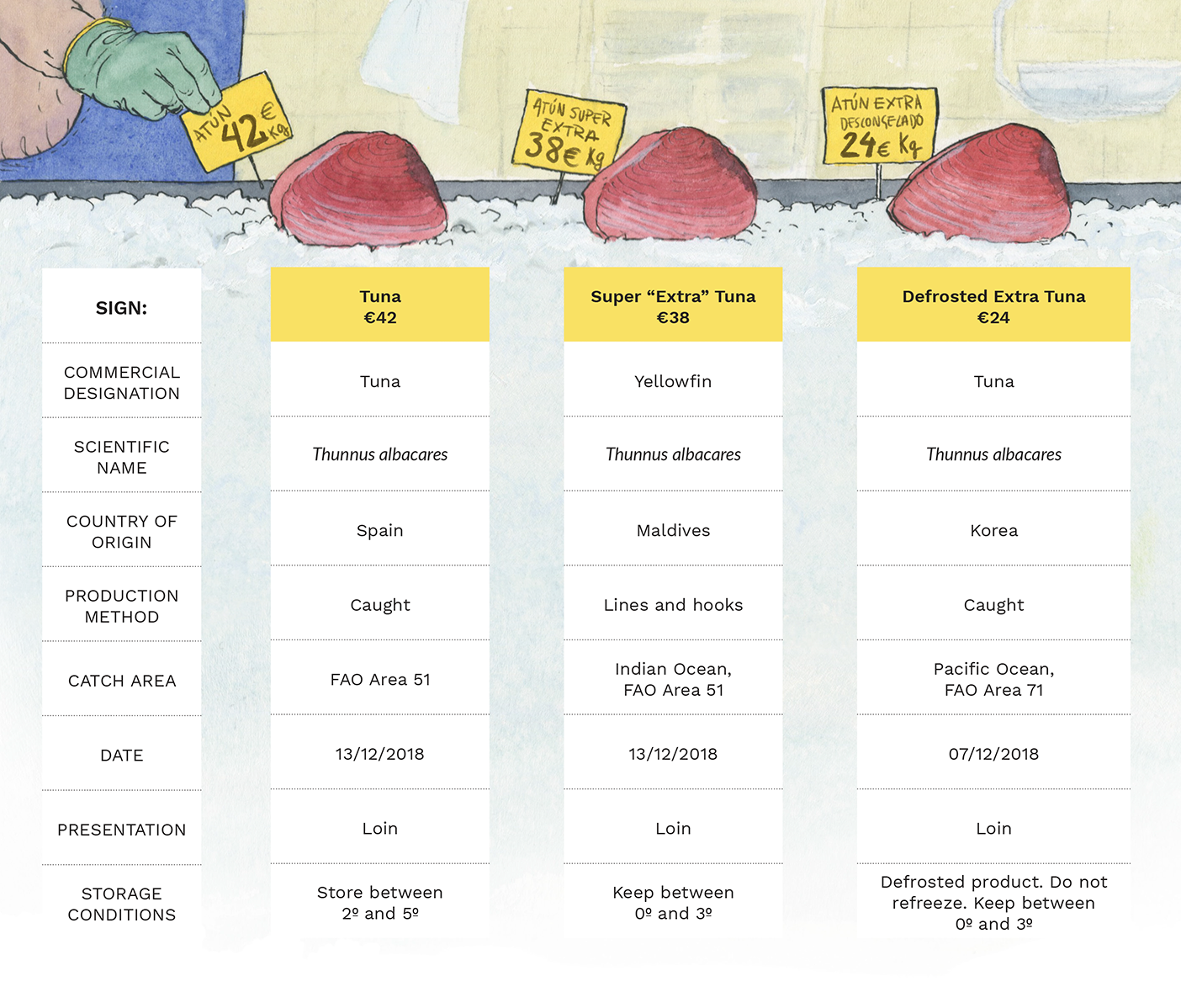 According to European regulations, the scientific name has to be included on the label for tuna being sold fresh or frozen.

Scientific names are made up of two parts: the first for the genus and the second for the species. The genus is the name of a group of closely related animals. An example of a mammal genus is Canis, which includes dogs, wolves, coyotes, and jackals. The four most common tuna species that are marketed fresh or frozen in Spain all belong to the same genus, so the first part of their names is the same: Thunnus thynnus (Atlantic bluefin tuna), Thunnus alalunga (albacore), Thunnus albacares (yellowfin tuna) and Thunnus obesus (bigeye tuna).  Two of the labels we checked on our visit to the market had used the generic term “tuna”, while the third said “Yellowfin”. When we took a closer look, we saw that actually all three were yellowfin, whose scientific name is Thunnus albacares.

Labels also have to provide information about the catch area as defined by the FAO fishing area classification, which includes the 19 main areas into which the Food and Agriculture Organization of the United Nations divides the oceans; each area is identified with a specific number (http://www.fao.org/fishery/area/search/en).  Remember that among the four tuna species that are most often marketed fresh, only Thunnus thynnus is caught in the Mediterranean or the Atlantic, whereas the other three –Thunnus alalunga, Thunnus albacares and Thunnus obesus– are fished in all the world’s oceans. At the market, it wasn’t easy for us to know at first glance what fishing area the tuna at one of the stalls was from, because its label only said FAO Area 51, and none of us knew the FAO areas by heart. The other two labels we checked were easier to figure out, because in addition to the FAO area, they specified Indian Ocean and Pacific Ocean respectively. These tunas had traveled a long way!

A label listing the production method as “caught” tells us that the tuna was not farm-raised, and only in one of these cases was more detailed information provided about the fishing gear. Information about the catch date and presentation help you know how fresh the tuna is and what part of the fish you’re consuming. In our case, the catch date for one of the tunas was six days before the sale date, whereas the others were dated the same day. One of the major problems with fraud is ensuring that the cold chain is maintained. Usually, bigeye and yellowfin tuna are frozen on the fishing boats, and that information should be included when they’re sold. In our case, it wasn’t easy to know from the label whether the tuna we were buying had been previously frozen or not. Only in one case was it clearly stated on the sign. It’s important to know, because if fish has already been frozen, we shouldn’t freeze it again. On the labels we checked, we also found the country of origin indicating the fishing vessel’s flag –Spain, Maldives, and Korea, respectively.

There are special regulations for Atlantic bluefin tuna, including the requirement of a bluefin tuna catch document (BCD).

This document provides information about the origin of each tuna and ensures its traceability all the way to the final consumer. It isn’t mandatory for other species. We didn’t see any Atlantic bluefin tuna when we visited the market. When buying Atlantic bluefin tuna, request the BCD document to make sure it’s authentic. You can also ask to see the BCD at restaurants. Undocumented Atlantic bluefin tuna sales are usually due to illegal catches. Fraud rates vary widely in markets, with values ranging from 70-80% to 7%, depending on the market and the part of the supply chain being analyzed.

Request information. There’s a huge difference between the price of Atlantic bluefin tuna and any other tuna species. After our visit to the market, we can say that prices can also vary enormously for the same species –sold at 42, 38, and 24 euros a kilo. Check the scientific name of the tuna species you’re buying to make sure you’re paying the right price for it. If we get used to asking for as much information as possible, as consumers we will gradually know more about the species of tuna we buy, and will consume as sustainably as possible to ensure continuity for this valuable resource.