Answering the Call of the Species

Completing its reproductive cycle is one of the most important moments in an Atlantic bluefin tuna’s life. Adult specimens take this matter very seriously, leaving nothing up to chance. The goal is to spawn successfully and have the highest possible number of fish survive.

Breeding-age bluefins begin their migration in the Atlantic and head for the Western Mediterranean. Their schools are so large that they can be seen from the air.

You’re probably wondering why they travel so far. Well, there’s not one single answer to that question. The most obvious explanation is that they seek out the best possible breeding conditions. Atlantic bluefin tuna are very demanding. First of all, they need the water temperature to reach at least 20ºC. When this happens, they release millions of eggs and huge clouds of sperm into the water. Spawning takes place about five meters below the surface, between two and four a.m. Apparently their reason for staying up so late is to avoid predators.

However, warm water is not enough to ensure successful spawning. There also has to be enough food for the young. Contrary to all logic, Atlantic bluefin tuna choose nutrient-poor waters to breed –and researchers are trying to figure out why. The advantage may be that if nutrient levels are low, there are also fewer predators around. And we know that to make up for it, the young practice cannibalism and often eat each other. When they reach a certain size they stop doing so, and from that moment on, they always travel in schools.

Once the adult tuna have reached the ideal place to spawn, the adventure of life begins for a whole new generation. Each fertilized egg is one millimeter across and floats in the water until it hatches. This process can take anywhere from 24 to 72 hours, depending on water temperature. For the eggs to hatch, the water has to have reached at least 20ºC, and they can survive at temperatures as high as 30ºC.

Only two out of every thirty million fertilized eggs will reach adulthood.

They reach maturity when they’re four to six years old and weight about 45 kg. That’s when they’re ready to spawn for the first time.

But let’s get back to our little fertilized egg, which looks like any other fish egg. Only a genetic analysis could accurately determine what species it is. When the egg hatches, out comes a 3.5-milimeter larva that doesn’t look at all like the adult it will become –if it’s lucky. Its first food is the yolk sac, which includes a droplet of oil. With this energy store, the larva can survive until it can open its mouth and start eating actively.

One of tuna’s features is that they eat with their eyes –well, not literally. The fact is that tuna only eat what they see. Aiming for survival, this little critter’s first goal during the first two days of its life is develop its eyes. In the first 48 hours, its mouth and its anus also open for the first time. These changes are essential for it to locate its prey and start eating. During the first few days, the larva also develops its pigmentation. The distribution and amount of these pigments allow taxonomists to identify each tuna species.

25 Days for a Complete Metamorphosis

Over the following two weeks, the larvae concentrate on developing their digestive system. This includes teeth, jaws, a stomach, and gastric glands. In these fourteen days, they also finish developing their visual system. Small crustaceans known as copepods and cladocerans, abundant in marine plankton, are the main dish on the larvae’s menu.

The formation of the swim bladder is another landmark in their development; this process begins on the third day of their lives. The swim bladder is a bag full of gas that enables fish to effortlessly stay at whatever depth they choose. To “activate” it, each tuna has to rise to the water’s surface and take in air.

During the larval stage, tuna stay in the warmer surface waters.

Adult specimens, on the other hand, venture as far as one thousand meters deep chasing after their prey.

The Atlantic bluefin tuna’s main food sources as it develops.

The next step in the larva’s path towards maturity is to complete notochord flexion –the bending of the larva’s equivalent of a backbone– to form the caudal fin at its back tip. As these and other fins develop, the larva becomes a better swimmer.

By now, our little tuna has eyes, a gut, and its various fins. About 25 days after it hatched, its metamorphosis has come to an end. This is the biological process through which the larva develops the characteristics of a juvenile, which looks more like an adult. Metamorphosis can be longer or shorter depending on water temperature and the amount of food the larva can find. The juveniles already have finlets, also known as pinnulae –small, rigid, yellowish fins that make the water flow smoothly past their bodies, helping them swim faster.

The juveniles become adults which continue to grow, fatten up, and go on their first long migration. Being a gregarious species, past the larval stage these fish always travel in schools. If they’re lucky, four to six years later they’ll be able to spawn, and the cycle will begin all over again. 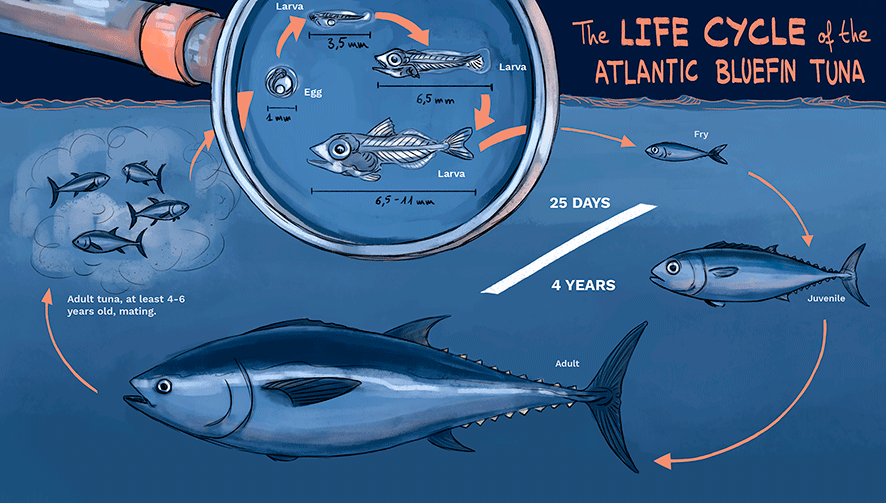