Skip to content
HOW MANY TUNA SPECIES ARE THERE IN COSTA RICAN WATERS?

How many tuna species are there in Costa Rican waters?

Eytan from Costa Rica asked us: How many tuna species are there in Costa Rican waters? 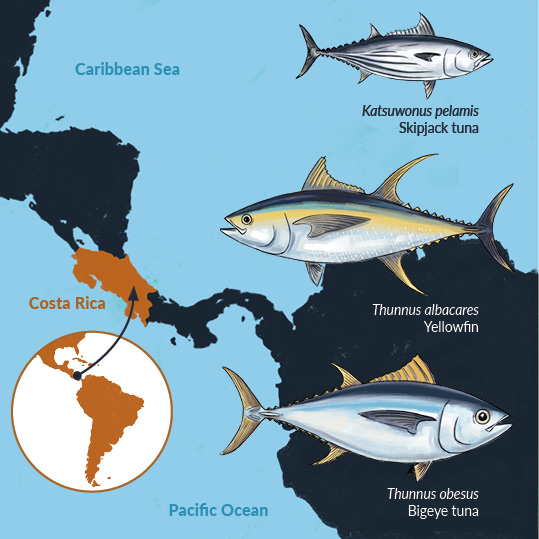 David Die from the University of Miami answered:

Costa Rica has oceans on both sides –on the Pacific and the Caribbean– so it has access to species from both ecosystems. In the Pacific, we find tropical tuna species: bigeye, yellowfin, and skipjack. This area is very productive because of upwelling, which involves masses of deep, nutrient-rich water moving close to the coastline. There’s a great deal of fishing activity from large purse-seine and longline fisheries targeting these species. There have also been reports of Pacific bluefin and Pacific albacore tuna catches in high seas outside Costa Rica’s exclusive economic zone, but they’re small compared to those of tropical tunas.

The three tropical tuna species (bigeye, yellowfin, and skipjack) are also found in the offshore areas of the Caribbean. However, open-water pelagic fish such as tuna are scarce on the Caribbean side. That’s why there’s very little commercial tuna fishing in this area, although there is some sports fishing.

A good source for locating tuna species is the FAO tuna atlas.